SIG SG552 Commando is a Switzerland assault rifle fed with 30 rounds of 5.56 NATO. It has high firepower and rate of fire and equipped with a usable scope for middle range engagement.

An Arctic Avengers member with an SG552. 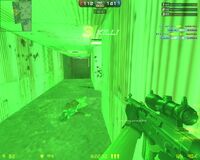