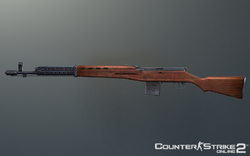 The SVT-40 saw widespread service during and after World War II. Intended to be the new service rifle of the Soviet Red Army, production was disrupted by the German invasion in 1941 resulting in a change back to the older Mosin-Nagant bolt-action rifle for the duration of World War II. After the war new rifles were adopted by the Soviet Union, such as the SKS and the AK-47.