Special Agent Lucia or Special Ops Lucia (in CSN:Z) is a Counter-Terrorist character in Counter-Strike Online.

Garcia Fleet Counter-Terrorism team leader. She made great achievements in the battle against terrorism in the Indian Ocean and became the leader of the team. She is dressed for special infiltration operations.

Unlike her previous model, she now has brown hair.

She wore black and white infiltration suit with bullet bandolier on both of her shoulder, the suit has the word spelling 'CSO' on it's left breast area, and 'LUCIA' on the back, it also has seemingly morphine shots under it's right breast area and it's back, Her shorts has matching color with her suit, a belt with gold decoration, a pistol holster on her left leg, pair of circle gold earrings, and a pair of black and gold high heels boots,. 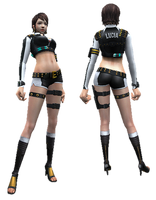 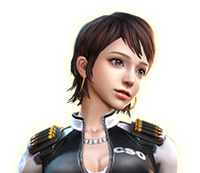