aug
Steyr AUG A1 or Schmidt Bullpup is an Austrian bullpup assault rifle in Counter-Strike series and Counter Strike Online 2 exclusive to the Counter-Terrorists.

The Steyr AUG A1 is an Austrian made bullpup assault rifle developed during the 1970s. It fires 30 rounds of 5.56×45mm NATO cartridge and is equipped with an optical scope, making it effective for long range combat. The Steyr AUG A1 has high rate of fire, accurate via scope and moderate firepower but has high recoil.

The player can choose to unlock the AUG instead of buying from shop, by collecting 75 kill points from M4A1.

Exclusive for Taiwan/Hong Kong region. Can be obtained by participating in the Open Beta. 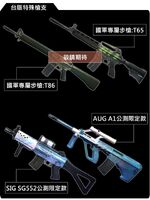