For her counterpart, see Leader Soi.
For her original version, see Jennifer.

A former reporter who sneaks into a research facility to cover the secretly proceeding Super Soldier project. After she escaped, she spent painful days suffering from the side effects of the experiment while investigating the back of Kronos, but after meeting Soi, she learned the reality of the Super Soldier Project and is working with Aegis Institute. 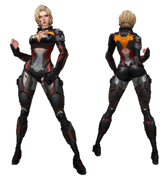 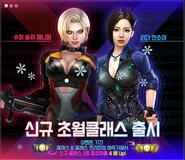 "I will have my revenge!"