Supply Boxes can be obtained randomly and are scattered around the map. They contain several types of weapons or items inside, depending on the mode you play.

A Supply Box is dropped randomly on a Zombie Modes map after every 20 seconds. The players need to press E on the Supply Box to use it. The buy menu will then appear, allowing the players to replace their own weapons if needed. Picking up a supply box for the first time will equip the player with Night vision goggles for the remainder of the round as well as replenishing ammo and grenades.

Supply Boxes also appear in Zombie Scenario with their own unique model, where they are dropped by random from zombies which are killed by players. Initially, the Supply Box is only available to pick-up for the player who lands the killing blow to the zombie, signified by a blue glow between the lid. If the box remains unpicked for a minute or so, the box can be opened by everyone else before respawning, in which everyone now can see the blue glow.

The frequency of the box drop will vary depending what kind of zombie is killed. Bosses will always drop a Supply Box for every players who are alive as the boss dies, and they will drop two Supply Boxes for each person (except Fallen Titan) in extra maps.

After the Zombie Scenario Re:boot, new Supply Boxes were introduced. Players can buy health, armor and ammunition through those boxes, which always appear at checkpoints or spawn zones (Note: those boxes only appear in Envy Mask and the following maps so far).

Picking up a Supply Box in Zombie Scenario or New Zombie Shelter will give the player either one of the following:

When a player opens the Supply Box in this mode, he/she will get either a special ability (Human/Zombie) or a weapon (Human only).

Picking up a Supply Box in Zombie Escape will give either one of the following:

New model for Zombie 4: Darkness has been added on 19 December 2013 in South Korea. It was released as "Warming Up" event before the actual release of Zombie 4: Darkness. In addition, it has replaced the Z-VIRUS model in both Zombie Modes 2 and 3.

Those boxes can only be obtained during event. The boxes which were not opened will be removed after event ended.

After the Splash update, new Supply Boxes were added, which are the same with the ones introduced in Zombie Scenario Re:boot, where player can buy health, armor and bullets.

The Supply Boxes in this mode have their own model. Player can get various special items if swap them up to eliminate the enemies.

After the 4 December 2014 update of South Korea, Item Battle has been rebooted. New models for Supply Box were added which show the item inside so the player can decide whether swapping them or not. The Supply Box now also provide more kinds of item.

After the 4 December 2014 update of South Korea, Hidden has been rebooted and the Supply Boxes were added. They provide skills and items which can help the players during battles. 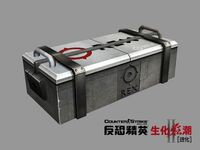 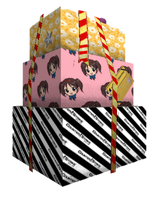 The icon of a supply box in Zombie Modes, showing its location and the distance in meters 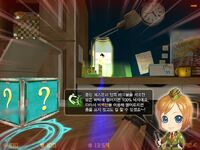