Supreme Sentinel is an Epic grade pistol in Counter-Strike Online.

A special weapon used by the Overseers, created with otherworldly technology. It can automatically detect and lock onto enemies. Its Void Judgment utilizes charged dark energy to fire a singularity that draws in enemies. Customized for the Overseer High Inquisitor. 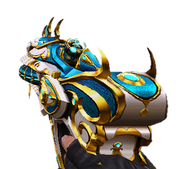 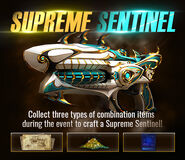