See Emma for her rival.

Tammy is a female Terrorist character in Counter-Strike Online 2.

An antisocial terrorist who calls herself as an avant-garde artist, Tammy. She has a famous background with full of crime commitments in LA and New York, such as hackings, bank robberies, kidnappings, etc.

With an extensive knowledge and sense of weapon modification that shown in the productions, her firearms are recognized to be very expensive for trading in the defense industry, as well as the art world.

With the influence of a complete revolution, Tammy joined the terrorists to have a chance of making an artistic world she's ever dreamed about.

Lobby screenshot
Add a photo to this gallery

South Korea poster
Add a photo to this gallery 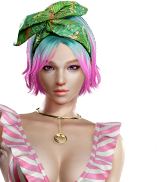 Shop icon
Add a photo to this gallery
Retrieved from "https://cso.fandom.com/wiki/Tammy?oldid=260024"
Community content is available under CC-BY-SA unless otherwise noted.