In a round, a counter-terrorist will become a VIP and must reach the extraction point without being killed by the terrorists before the time runs out. The counter-terrorists must protect the VIP in order to win the round while oppose to the terrorists. The Counter-Terrorists can reserve to be a VIP by pressing the change team button (default: M button). All VIPs that are turned back to normal Counter-Terrorists will use the 5 original skins.

The VIP is armed with a USP with two magazines. Each magazine holds 12 rounds of .45 ACP so he has a total of only 24 rounds, so he can't rush to the escape zone alone as the ammo he has might not be enough. He's also armed with a knife, the knife he used is the knife used in the round or game before. He cannot pick up or buy other weapons. He is also well armored, with his 200 points Kevlar. But, he has no helmet, making it troublesome when dealing with pro players. 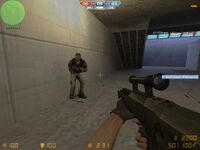 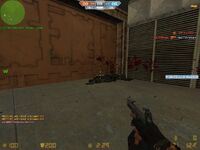 Ditto, as the VIP 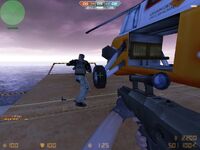