Yaksha is a zombie type in Counter-Strike Online.

This item can only be used in Zombie mode.

The Revenant zombie was powerful, but it needed a lot of stuff to produce a strong body. It began to recruit those who had it, and after a while, the monster's sightings spewing fire from the explosion terror scene began to be heard.

It can absorb and deal damage. Skills: 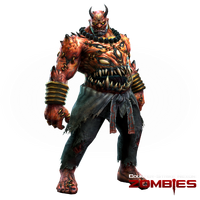