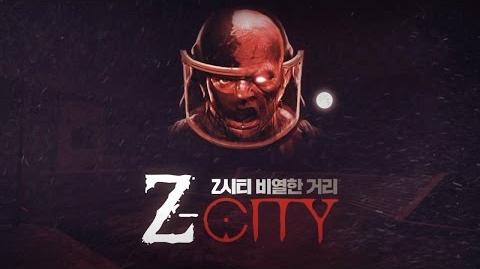 Thank you for your help during the zombie outbreak. Thank you for experimenting! Urge them to see the results quickly this time. Confirm the scale of the experiment! The experiment is okay. It will take place by day and night in this city. Named as Z-City! Good luck! That's all for this experiment. Maybe you should familiarize yourself well to survive!

This is a mode in which all players become enemies, killing opponents and surviving. The game ends when the last one is chosen as the final survivor. When the game starts, it does not have any equipment. But do not panic! Find items scattered throughout the city to collect items for survival and growth.

At night, zombies become stronger and you can get a variety of items by killing zombies.

Dr. Mad's survival experiment begins. Now the last survivor is not alone. In extreme situations, humans come to the test bench to see if they can cooperate.

If the other player is too strong, you can spend time in hiding and gradually gain abilities, or hunt weaker opponents to gain experience and gain experience. But be careful, if you spend too much time in a pointless way, you do not know what an angry Doctor Mad will do.

There was a play method to secure the survival time by alternately riding the vehicle using the durability of the vehicle. This makes it more disadvantageous for players who are actively engaged in combat. In order to prevent this, we have improved the amount of damage when you are outside the safe area while you are in the car.

Fixed an issue where items occasionally disappear from the bottom when dividing items with team members.

Increased explosive range and power of the RPG-7 to suit rare ranks.

The sniper rifle weapons were too powerful and many were unable to respond to enemy fire. So we lowered the power of the mutations associated with the sniper to control the impact of the sniper rifle.